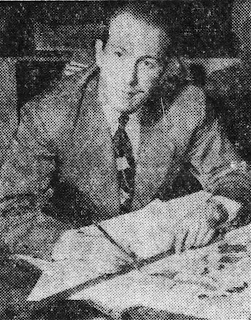 George Raymond “Ray” Hudson was born on July 31, 1919, in Weedsport, New York, according to his World War II draft card.  In the 1920 U.S. Federal Census, Hudson was the youngest of four children born to George, a railroad mail clerk, and Florence.
The 1925 New York state census recorded the Hudson family in Brutus, New York, on South Seneca Street. They have not yet been found in the 1930 census.
According to the 1940 census the Hudsons resided in Irondequoit, New York since 1935. The address was 113 Coolidge Road. Hudson lived with his parents and maternal grandmother. On October 16, 1940, Hudson signed his World War II draft card. His street address was the same but the town was called Point Pleasant. He was a Michigan State College student. His description was five feet ten inches, 150 pounds, with blonde hair and hazel eyes.
The Chicago Tribune, February 16, 2012, said Hudson earned money for college by working at Eastman Kodak in Rochester, New York, in 1937 and 1938. From 1938 to 1942, he attended Denison University, in Granville, Ohio, where he was president of his fraternity and the 1942 graduating class. Hudson served in the Army from 1942 to 1945. He was in a psychological testing unit evaluating airmen for mental fitness to serve overseas.
After his discharge, Hudson enrolled at the American Academy of Art in Chicago. He graduated in 1947. Hudson’s studies included painting, lettering, graphic design and photography. In 1948 Hudson was a partner in an advertising agency. He produced Travelin’ Ted, from September 17, 1950 to March 2, 1952, for the Tribune.
Hudson was active in the American Legion and was commander of Legion Post 250 in Hinsdale, Illinois.
Hudson pursued a political career and was elected to the Illinois State Legislature in 1970 and served to the mid-1980s. The Illinois State Senate was Hudson’s next office beginning in 1986 to 1994.
The Democrat and Chronicle (Rochester, New York), July 29, 1942, reported Hudson’s marriage.

Miss Barbara Anderson, daughter of Mr. and Mrs. Walter Anderson of Chicago, became the bride of G. Raymond Hudson, son of Mr. and Mrs. George Hudson of Coolidge Road, July 9 in the Bryn Mawr Community Church in Chicago. A reception was held in the home of the bride’s parents following the ceremony. Mr. and Mrs. Hudson left immediately afterwards for San Antonio, Tex., where Mr. Hudson is affiliated with the Army Air Forces at Kelly Field. Both he and Mrs. Hudson are graduates of Denison University.

Hudson passed away on February 10, 2012, in Downers Grove, Illinois.