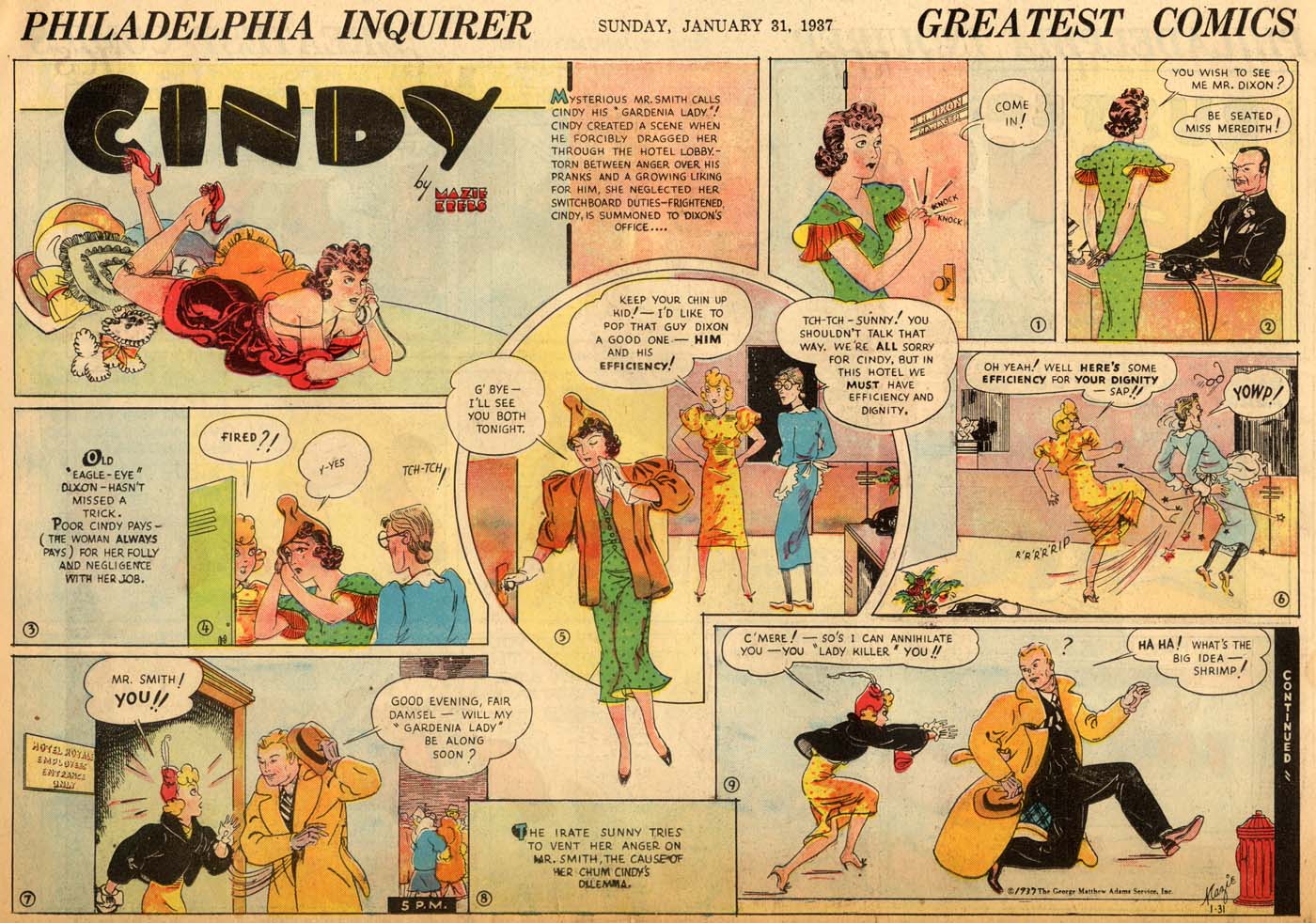 Mazie Krebs wore a lot of hats in her life, with perhaps the most memorable one being as industrial designer. She gained some lasting fame for her flagship project, the Mississipii steamboat christened The SS President.

Not long before that, she went a whole different direction, submitting the comic strip Cindy of Hotel Royale to the George Matthew Adams Service. Mr. Adams must have been very impressed, because he supposedly offered Krebs a five year contract to produce the strip as both a daily and Sunday feature. The syndicate generally stuck to daily material, especially after a disastrous attempt at offering a preprinted Sunday section in 1935 that flopped, so Adams was really going out on a limb for this feature.

Cindy of Hotel Royale was first advertised in the 1936 Editor & Publisher Syndicate Directory, but I’ve never found any strips published in that year. The earliest I’ve seen the strip is an example above, a Sunday from the end of January 1937*. Dave Strickler’s E&P index notes a start date of January 9 1937, but I don’t know the source from which he got that, and that date is a Saturday, not a likely day to start a new strip.

Whatever the start date, it certainly didn’t appeal to many newspaper editors. The strip is nearly impossible to find. Oddly for Adams, the daily seems even rarer than the Sunday, which is a real headscratcher for a syndicate that specialized in daily material. Weirder still, as best I can tell you seemed to need both daily and Sunday to tell a coherent story with this strip, and I have yet to find a paper that ran both. Granted, my sample size is awful small — the aforementioned Inquirer, the Atlanta Constitution and the New Orleans Times-Picayune (the first two ran the Sundays, the latter ran dailies).

In a 1940 interview with the St. Louis Post-Dispatch, Krebs had this to say about the strip:

“I rather oversold myself to Mr. Adams. He gave me a five year contract. I had ideas for years ahead but producing a strip a day and a page for the Sunday papers, proved too much for me. Mr. Adams came to town, saw the circles under my eyes, meeting the hollows in my cheeks, and obligingly released me from my contract although it was most embarrassing in view of his commitments and the fact that after a year the strip was beginning to go over big.”

I doubt that Adams was too attached to the strip, which was definitely not actually ‘going over big.’  However, I must say that it did have a winning appeal to it, both in art and writing. Why it didn’t go over big is the mystery. I don’t know that I would have bet as big as Adams did on it, but I can certainly see why he liked it so much.

As best I can tell, the Sunday ended on December 26 1937**, with the final installment just a sheet of paper dolls. The daily ended with Cindy sailing off into the sunset on January 1 1938***.

* Though these samples are obviously from the Philadelphia Inquirer, the online digital version of the paper, though it includes Sunday comics sections in this era, does NOT include this strip. It must have run in some other section (maybe a women’s magazine section?) that did not get microfilmed.

One comment on “Obscurity of the Day: Cindy of Hotel Royale”