Mason Tappan “Tap” Goodenough was born in Boston, Massachusetts, on March 31, 1910, according to the Massachusetts birth records at Ancestry.com. Tappan was his mother’s maiden name.

In the 1910 U.S. Federal Census, Goodenough was barely three weeks old when the census was enumerated. He was the only child of Harold and Helen. He, his parents and maternal grandmother resided in Boston at 120 Foster Street. Goodenough would live there into the 1930s.

The Boston Herald, January 17, 1926, named the honor roll students, including Goodenough, at Huntington High School. The school swim team was pictured in the Herald, January 27, 1928. Goodenough was the manager and already known by his nickname, Tap.

Information regarding his art training has not been found. A 1930 Boston city directory listed Goodenough as a cartoonist. The following year’s listing said he was in the art department at “5 Winthrop Sq”, which was the address of the Boston American newspaper.

The General Features Syndicate syndicated a number of strips in 1937. Among them was The Sports Parade which was copyrighted by Chuck Thorndike. Editor & Publisher syndicate directories have these credits for The Sports Parade: Tap Goodenough in 1937 and 1938; Tap Goodnuff in 1939; Taper Tapper in 1940; and S.C. Begg in 1942. Apparently Goodenough produced the strip for the first three or four years. 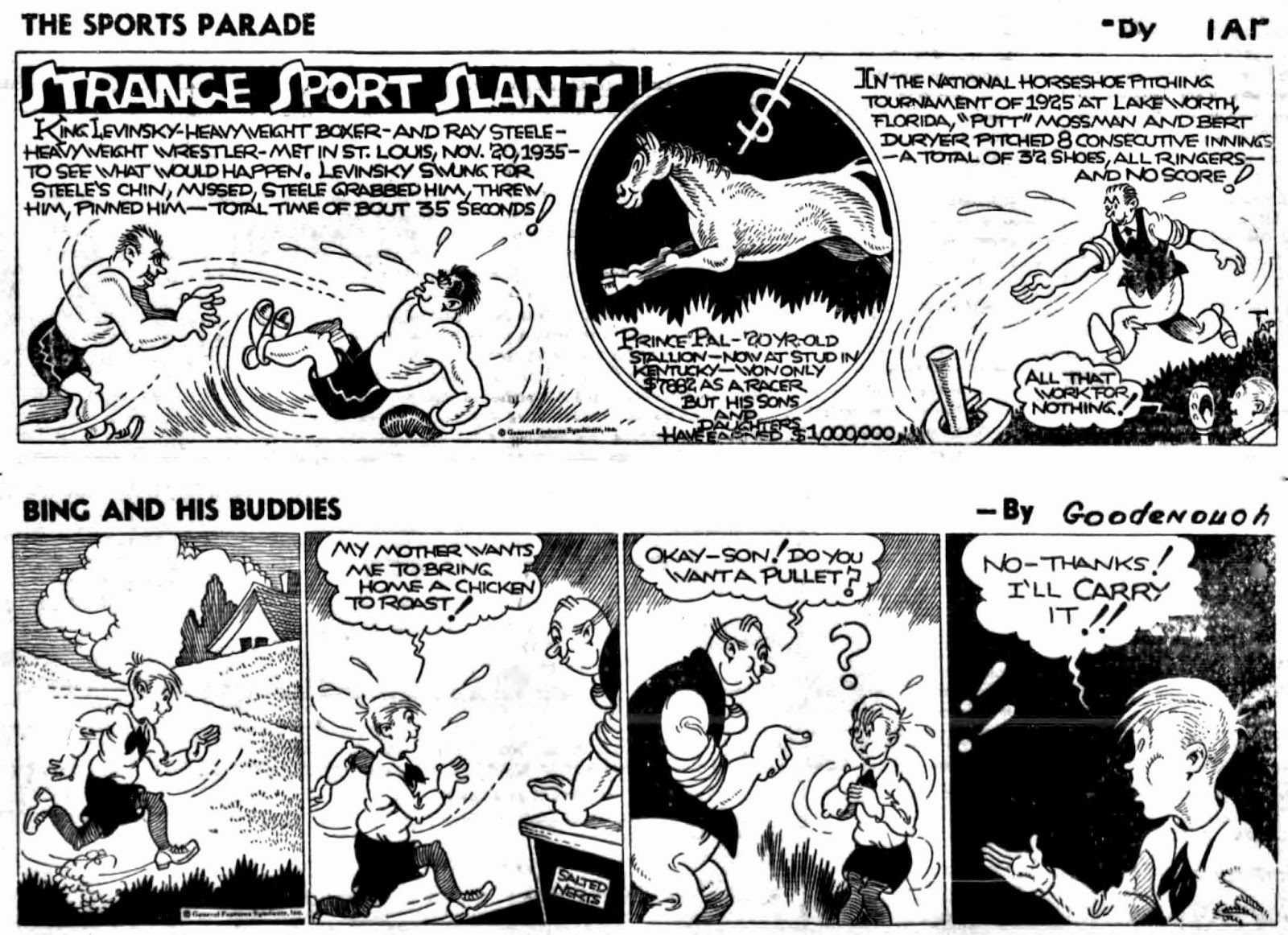 In 1939, Goodenough resided at 35 Pinckney Street and was an artist at “Amer-Rec-Adv”.

Goodenough’s address was the same in the 1940 census which said he was a newspaper artist. The New Hampshire Marriage Records, at Ancestry.com, recorded the marriage of Goodenough and Viola Rennert on December 28, 1940, in Franconia. In 1942, Goodenough lived at 41 Revere in Boston and continued as an artist with the same employer.

In addition to artwork, Goodenough was also writing a column. The Portsmouth Herald (New Hampshire), July 6, 1942, reported the new publication, The New England Outdoor Editor, that had “…a masthead…from a sketch by ‘Tap’ Goodenough, Boston American artist-columnist.”

During World War II, Goodenough enlisted in the army on February 19, 1943. While the 1943 directory said he was an artist, the Herald, February 12, 1943, referred to him as “Boston ski columnist”. Subsequent directories listed his occupation as reporter.

Richard Shaughnessy and Goodenough were co-authors of Skeet and Trapshooting (1950).

The Herald, June 28, 1975, reported the death of Goodenough’s mother and said she was survived by her son “…of Yarmouth Port, a former sportswriter for the Boston Record-American and the present outdoor editor for the Quincy Patriot Ledger of Quincy”.

Goodenough passed away October 5,1992, in Bedford, Massachusetts, according to the Massachusetts Death Index.