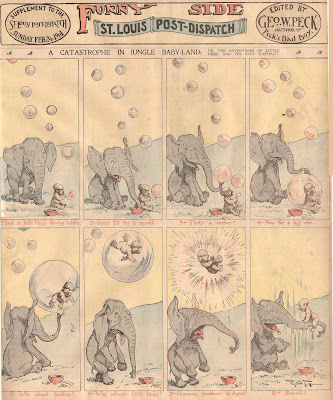 On Monday we looked at a pretty strong bit of racism from the pen of Syd B. Griffin, so let’s try to rehabilitate him a bit today. Although Little Umjiji features a little African tyke, I would have to say that there is no racist intent here whatsoever. We simply have a series of low-key pantomime (if you don’t count the extraneous text used with the first sample) adventures featuring a little boy and African animals. If the strip weren’t pantomime would Umjiji speak that mushmouth dialect so much a part of the stereotype? Oh, probably, but let’s give Griffin the benefit of the doubt.

Little Umjiji was created by the great Ferd Long for the New York World comics section on November 4 1900, but he failed to follow up after that single episode. Griffin picked up the title and produced episodes between February 24 and May 19 1901.

Thanks to Cole Johnson for the scans!

One comment on “Obscurity of the Day: Little Umjiji”