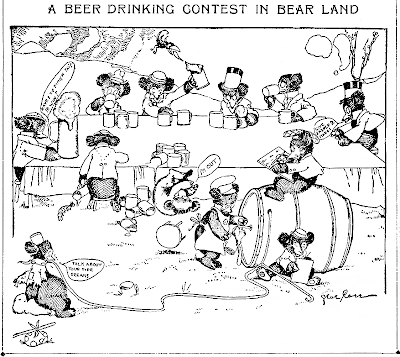 Bearville (aka Bear Land) was the great Gene Carr’s very first continuing feature. It ran in the New York Evening Journal for a grand total of six episodes from April 19 to May 7 1901.

Carr’s bears were pretty much a straight copy of the famed Little Bears, a feature that brought Jimmy Swinnerton a measure of fame in the 1890s at Hearst’s San Francisco Examiner. Hearst brought Jimmy out to New York after the Little Bears feature had run its course in San Francisco, and Swinnerton switched from (California) bears to (Tammany) tigers for his attempt to duplicate his previous success. Swinnerton’s new animal choice did well by him — his Mr. Jack eventually evolved from the tigers and popped up in one form or another for decades in Swinnerton’s work.

Although of course it’s impossible to know the inside story of Carr’s feature, I like to imagine that the budding cartoonist Carr might have come to fellow Hearst man Swinnerton looking for instruction and advice. Swinnerton might have shown him a scrapbook of his San Francisco bear cartoons and told him something to the effect of “Hey, bud, try these on for size. They’re easy to draw and they got me where I am today!”.

A big tip of the bearskin hat to Cole Johnson who supplied the samples of this extremely rare and short-lived feature.