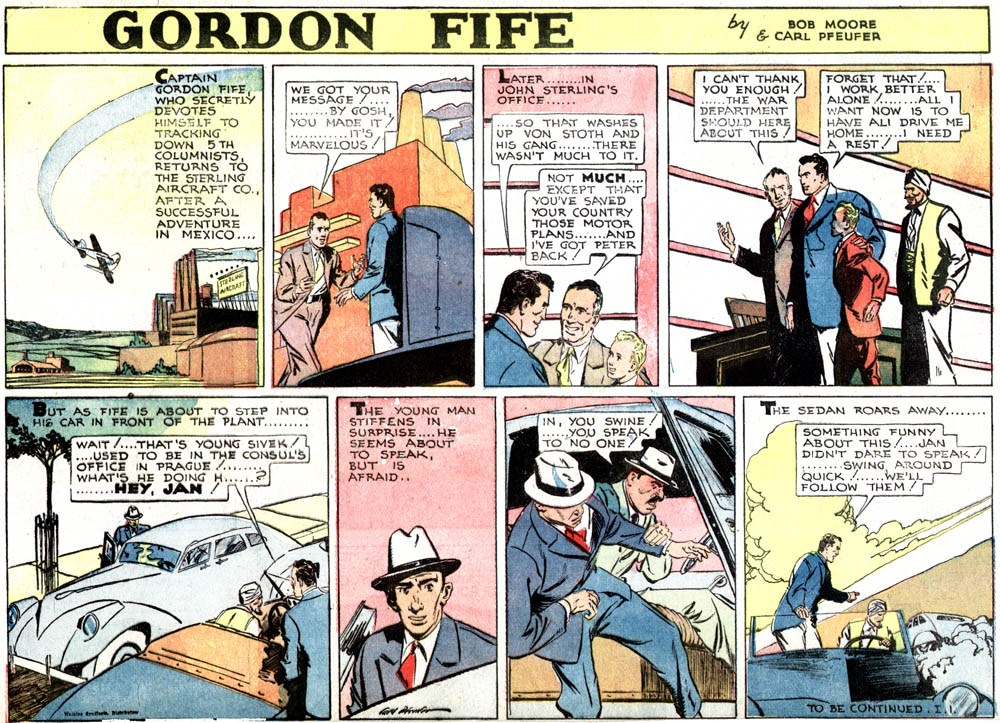 Gordon Fife was one of the first products of the Watkins Syndicate. For years I thought Watkins was the syndication division of the Brooklyn Eagle because the Eagle ran much of their material, and both Maurice Horn and Ron Goulart claimed there was a connection. I just recently learned that assumption could be wrong. According to the E&P Syndicate Directory of 1939, Watkins was based in Philadelphia, not New York. So at this point I don’t know whether Watkins was associated with some paper or not. I do know that I haven’t seen their material running in any Philadelphia papers, but that could easily be explained by gaps in my research or collection. What I really need to do is cross-reference the syndicate’s address (2214 Chestnut Street) with the addresses of Philadelphia newspapers to see if I come up with a match. So if anyone has information on Watkins I’d love to hear from you. Watkins is a very interesting syndicate not only for the material I have found, but even more so for the interesting strips I haven’t. In 1939 Watkins advertised a whole batch of interesting titles in the E&P Syndicate Directory – Air Sub DX, Fantom of the Fair, Masked Marvel, Skyrocket Steele, etc. Comic book fans will recognize these names as characters from the Centaur comic book company. What’s the connection? I dunno.

Anyway, back to Gordon Fife. The strip started as a daily titled Gordon Fife, Soldier of Fortune. Horn says it was alternatively titled Gordon Fife and the Boy King – this must have been very early on because it was changed by February 1936, from which my earliest examples. The strip was written by Bob Moore and initially drawn by Jim Hales. Carl Pfeufer took over the art duties in December 1936. Pfeufer had a sketchy style that showed a lot of Alex Raymond influence (okay, swipes). To really enjoy Pfeufer’s work it’s important to pay attention to the great backgrounds – he loved to draw fanciful art deco buildings and machinery. The sample above includes several neat Pfeufer touches.

Gordon Fife was an amateur adventurer, constantly stumbling into intrigue of one sort or another. As the title suggests he started out as a soldier for hire, later on he took on any adventure that fell into his lap, which, of course, they did with stunning regularity. The continuities, though far-fetched, were quite well-written in comparison with many others of this burgeoning genre. The success of Terry and the Pirates and the Captain Easy character in the Wash Tubbs strip seemed to have had everyone jumping on the adventure bandwagon at the time.

The daily, which is exceedingly rare, ran until 3/27/1941 in the Brooklyn Eagle according to Jeffrey Lindenblatt. Horn says it lasted until July, apparently citing the same paper as source. I’d say trust Jeffrey, but his date is a Thursday, so I have to say the matter could use a confirmation one way or the other.

A Gordon Fife Sunday was added on August 11 1940, and was soon being sold as a new companion strip to Don Dixon when that strip lost its long-running topper Tad of the Tanbark, which ended in November or December of 1940.

According to Maurice Horn, the Gordon Fife Sunday also ended in July 1941, which it did in the Brooklyn Eagle, but actually it ran until January 11 1942, at least in the San Francisco Chronicle.

3 comments on “Obscurity of the Day: Gordon Fife”