First up an ad that bookends nicely with yesterday’s crime against Sunday comics. Here the CTNYNS advertises their great new way to save a few picas of space on the daily comics page by shaving a notch out of the strips: 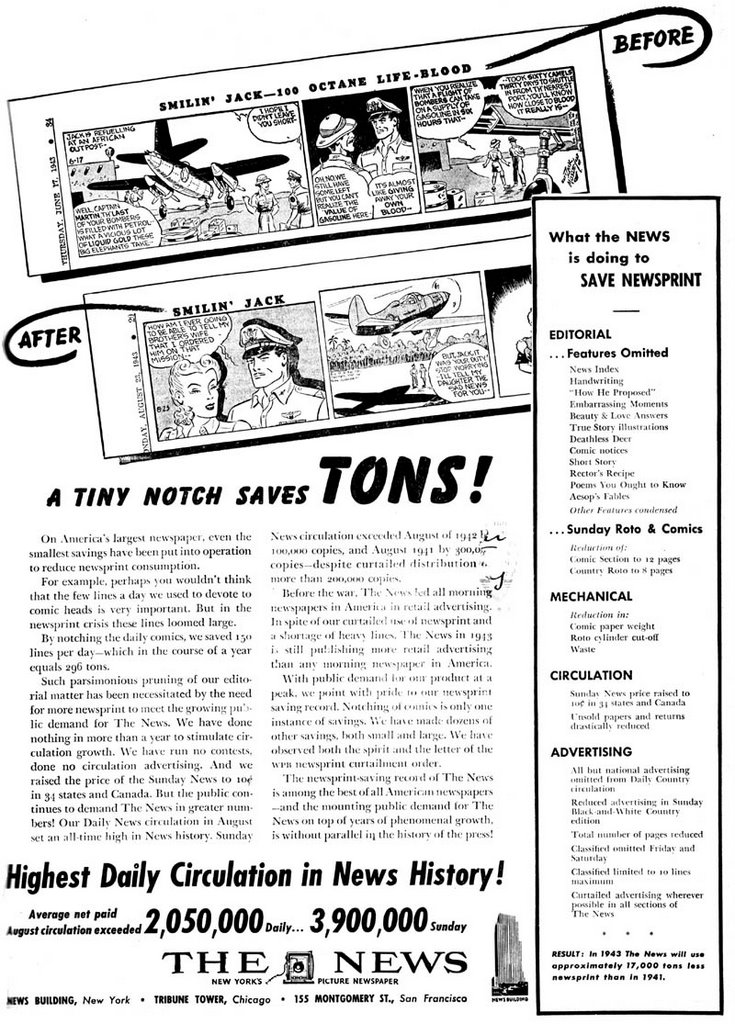 And here’s a short item that reveals why Don Winslow was ghost-written:

Personals and Notes
Bell Syndicate has re-signed Frank V. Martinek to a long-term contract, it has been announced. Martinek is creator of “Don Winslow of the Navy,” daily strip. Cartooning is an avocation with Martinek, who is assistant vice-president of the Standard Oil Company of Indiana.

And finally, Harold Gray gets himself into a bit of hot water:

The Louisville (Ky.) Courier-Journal dropped the daily strip in protest, bringing on itself a flood of pro and con letters, but is continuing to publish it as a Sunday feature. Despite complaints of readers, it continues to omit the strip, explaining:

” ‘Little Orphan Annie* was dropped because its sponsors, a syndicate controlled by the New York Daily News and the Chicago Tribune, had turned it into a vehicle of propaganda against gasoline rationing. The Courier-Journal, as readers of this letter column, of our columnists and of our reports of controversial news and speeches know, does not mind presenting opinions contrary to our own.

“Nevertheless, we have to insist that opinion of whatever kind be duly labeled as such and not smuggled into comic strips in the guise of entertainment.”

On the other hand, the Waterbury (Conn.) Republican-American editorially pointed out that “the OPA is reported to be squirming” because of the strip’s continuity, and that “it would have Gray cease and desist.” The OPA does not like the down-to-earth presentation of facts, the Republican-American pointed out, adding, it is another instance of a government agency attempting to censor the press.

At the syndicate office Editor & Publisher was told that the “OPA has not communicated with us,” and a spokesman denied reports that cartoonist Gray had entered into the controversial continuity at the instance (sic) of either Captain Joseph M. Patterson, publisher of the New York Daily News, or Colonel Robert R. McCormick, publisher of the Chicago Tribune.

“It was Gray’s own idea,” the spokesman said. “In fact, when we first saw the continuity we were under the impression that it would run only a few days. So we let it go through. When we saw that it was running longer than expected and that the theme was strongly on the propaganda side, we informed our clients that we were cancelling the rest of the strips and substituting new ones for them.”

This was done before any protest had been made by any one, it was said. Since the incident has received publicity, several other papers havewritten to the syndicate, criticizing in one way or another Gray’s continuity.
“The whole thing is a tempest in a teapot,” Mr. Gray informed Editor & Publisher. He was at a loss to understand why anyone would find fault with what he had done. “I took anything I have used out of the daily newspapers,” he remarked. “I made nothing up out of my head. 1 can’t for the life of me see how any citizen can live in a community and not be affected by the OPA, especially as regards gasoline rationing.

“The OPA’s state of obfuscation laid them open to a little kidding, which is all I did. Which is all I intended to do. However, the syndicate has asked me to drop the continuity and I have complied. I rather suspect the cartoons struck home in what they were showing or they would have been ignored.”

The Fairfield (Conn.) News, a weekly, last week published a story pointing out that the name “Flask,” which Mr. Gray gave to the strip’s dictatorial OPA official, was strangely similar to a Robert C. Flack, chairman of the local ration board. “Is Orphan Annie Hitting Below Belt by Coincidence?” it asked in a headline.

In answer to this Mr. Gray explained: “We have a standing rule in the business which calls for us to use inanimate objects as subjects for our names. The name ‘Flask’ came to me as I was thinking of snoopers. Snoopers brought to mind prohibition. And the next logical thought was the hip flask. That’s how I arrived at that name. I’m sory if it has inconvenienced the OPA gentleman. I assure you it was pure coincidence.”