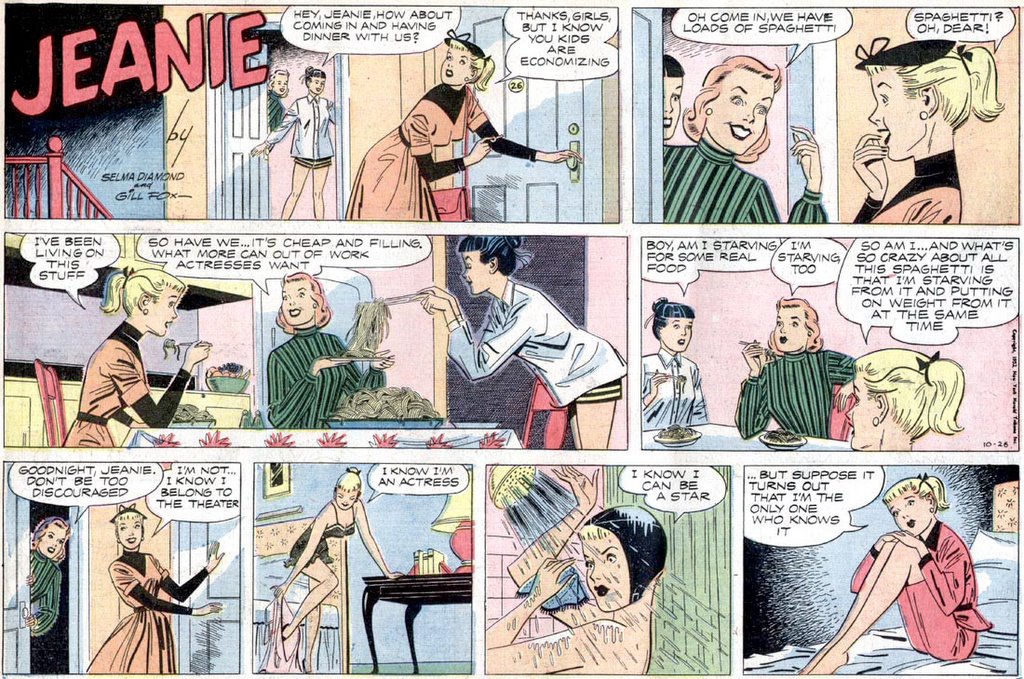 Now here’s a real treasure. For reasons I can’t fathom it never appeared in many papers during its run, and has been ignored or undiscovered by fans since.

Jeanie started as a ‘filler’ strip in the New York Herald-Tribune. During most of the 40s and 50s, the H-T ran a series of sixth-page strips as fillers when the page layout required. Usually this happened when they ran a page with a half-page strip and a third-page ad. The extra space would be taken by a one-tier filler.

Most of these ‘filler’ strips are eminently forgettable, but there are some notable exceptions. Perhaps the most interesting was Harvey Kurtzman’s Silver Linings. But Jeanie is no slouch, either, with lusciously crisp art by Gill Fox, and snappy story by Selma Diamond. Diamond was a noted comedy writer and later a character actor. She’s best remembered for her role on the sitcom Night Court. A short bio can be found here.

The strip started its run on 8/26/1951. Jeanie was eventually recognized as being far too good to remain an occasional filler strip, and was graduated to a full-fledge regular Sunday strip plus a daily in April 1952. As we already know, the syndication market was unaccountably uninterested in the well-drawn and well-written adventures of an often scantily clad gorgeous babe. Lack of syndication sales was probably the reason that Gill Fox dropped out in March 1953, to be replaced by Leon Win (a pseudonym?). Win’s artwork looked like a very rushed version of Fox, and for all I know, may actually be just that. In any case, the drop-off in art quality certainly didn’t help the strip’s syndication chances, and it ended on 9/27/1953.

4 comments on “Obscurity of the Day: Jeanie”