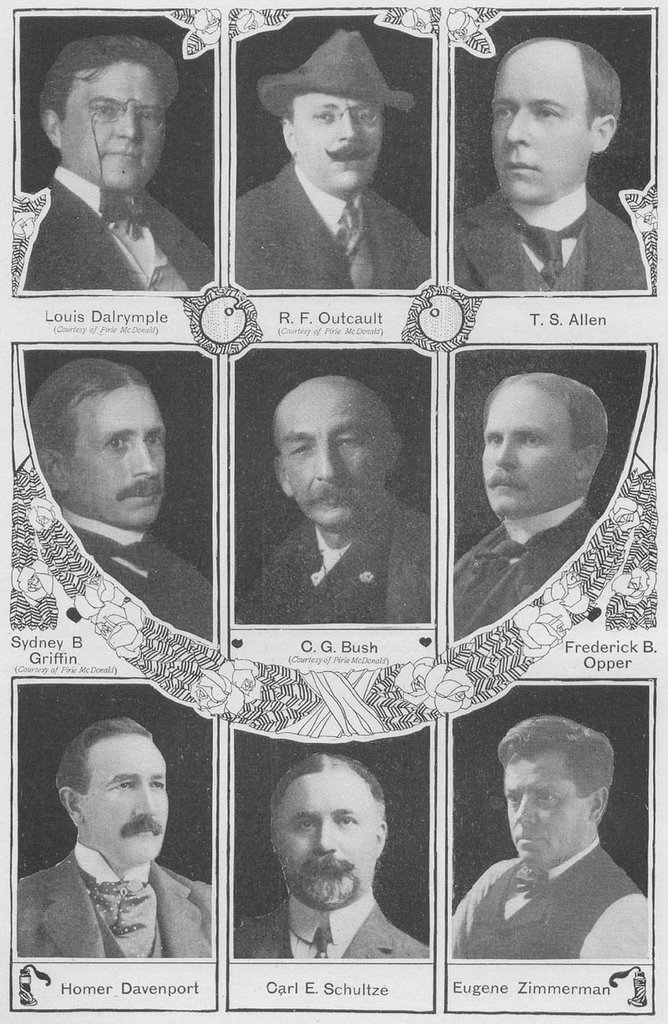 A short while ago I saw a book advertised on eBay that contained some capsule biographies of great cartoonists. I procured a copy, which turned out to be two book set, and thought I’d pass along the relevant bits (only about fifteen pages of material). The cartoonist photos, though small, are a great find because I’ve never seen a few of these guys photographed before (T.S. Allen, for instance). Most of the bios are quite terse, but in parts 3 through 5 of this series we will get extended articles on Charles Dana Gibson, Homer Davenport and Frederick Burr Opper that offer some real insights.

So here is part I of excerpts from Little Visits With Great Americans, or Success Ideals and How to Attain Them, edited by Orison Swett Marden and published by The Success Company in 1905.

Charles G. Bush, the cartoonist of the New York World, is an example of success achieved comparatively late in life. His early work consisted for the most part of magazine illustrations of a serious nature. After studying in Paris, under Bonnat, he, on his return to America, endeavored to follow a career of painting, but fate willed it otherwise. In 1895 Mr. Bush drew a cartoon in which David B. Hill was the principal figure. The New York Herald accepted the picture, and the next morning Mr. Bush woke up to find himself famous as a cartoonist. From thence on his career has been one of more or less constant successes.

Louis Dalrymple, the illustrator and cartoonist, was born at Cambridge, Illinois, January 19, 1861. After receiving a common school education, he entered the Pennsylvania academy of fine arts, graduated from it with credit and later studied at the art students’ league of New York. Subsequently he branched out for himself and began to submit drawings to the metropolitan comic publications and newspapers. Work of this kind secures immediate recognition for an artist who can comply with the public demands of the moment. Mr. Dalrymple being not only clever but shrewd, it came about that within a very short time he was kept busy in executing commissions. His work is characterized by a delicacy and acumen that prove that he thinks as well as he draws.

When the modern daily newspaper began to add to its news columns the so-called supplement, there was a coincident demand for artists who had the gift of humor. Sydney B. Griffin was one of such, and for some years past his supply of unique ideas seems to have been inexhaustible. He was born October 15, 1854, of English and Scotch parents, attended public schools at Detroit, Michigan, and, in 1888, came to New York. When his first ideas were presented to Puck they were declined, but upon his taking them to Judge they were accepted forthwith. Mr. Griffin took the trouble to inform the Puck people of his success with their rivals, whereupon he was told that his work had been refused for the simple reason that it was so excellent that it was feared that it was not original. However, Puck made the amende honorable by engaging him forthwith. Mr. Griffin’s style is bold and slashing and his drawings are full of point and power.